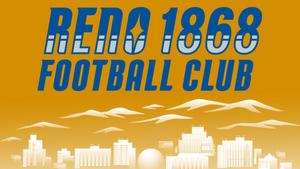 See the Nevada flag in the colors of Reno 1868.

RENO – Reno 1868 FC unveiled its official team colors – Nevada Cobalt Blue, light gold and silver grey – on Saturday in Arroyo Mexican Grill at Greater Nevada Field. The colors incorporate elements of the current Nevada state flag, which was adopted in 1926 and updated in 1991. With all home matches played on green grass, all of the colors of the flag will be represented on matchdays in Reno.

Supporters overwhelmingly wanted the colors of the Nevada flag to be represented. While the sagebrush emblem is not included in the official Reno 1868 team colors, it may be included in ancillary materials in the future.

“Our supporters continue to drive the evolution of Reno 1868 FC,” said club president Eric Edelstein. “There are so many more great days ahead of us, and we will be proud to represent Northern Nevada’s past, present, and future through our new team colors.”

Before Reno 1868 begins play in March 2017, Greater Nevada Field will host a friendly on May 25 between Liverpool FC U21’s and Sacramento Republic FC, as well as a regular-season United Soccer League match on June 11 between Sacramento and Real Monarchs SLC. Tickets are now available online for both the May 25 contest and the June 11 match.

The Reno 1868 crest, uniform and coaching staff will be announced at a later date. For questions, or to discuss special interview or photograph needs, contact Cheyne Reiter at (775) 334-7089 or creiter@renoaces.com.