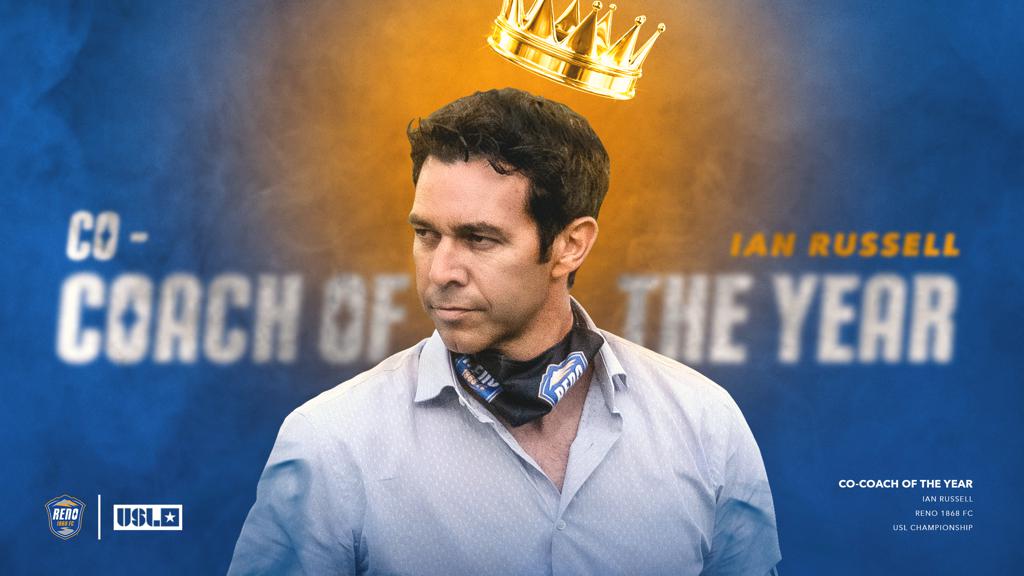 RENO, Nev. – Reno 1868 FC head coach Ian Russell has been named co-winner of the 2020 USL Championship Coach of the Year, along with New Mexico United coach Troy Lesesne. Russell guided Reno to an 11-2-3 record this season, good for the top overall seed in the playoffs and scored the most regular-season goals in the league.

Russell had been named a finalist after the 2017 and 2019 seasons, with this being his first time winning the award.

In a season shortened by the COVIDd-19 pandemic, Russell led Reno to the highest regular season finish in club history as well as a long list of individual successes. Last week, the club announced that midfielder Kevin Partida, defender Sam Gleadle and forward Foster Langsdorf all signed with Minnesota United FC of Major League Soccer.

Just days previously, USL announced Partida and midfielder Christiano François both earned spots on the All-League Second Team. Neither player had ever earned the honor before, and both posted career years.

In his first season with Reno, Langsdorf finished fourth in the league with 11 goals in 18 games this season, after scoring 21 in the previous 57 games of his career. Gleadle successfully made a transition from midfielder to outside back, emerging as one of the top at his position in the league.

Russell led the team to the first home playoff win in club history, instituting a new defensive system onto a team with just six returners from the 2019 season.

Gleadle was signed in 2018 after a trial with Reno, and in three seasons playing for Russell has risen to a level warranting an MLS contract. Langsdorf and Partida were both MLS draft picks, but neither had appeared in an MLS game since June of 2019.

In his four seasons as Reno’s head coach, Russell has won 62 games including two in the playoffs. The win total makes him the second-fastest in league history to win 60 games — doing so in just 112 games. Reno has never missed the playoffs with Russell at the helm, and has earned an average of 1.78 points per game.