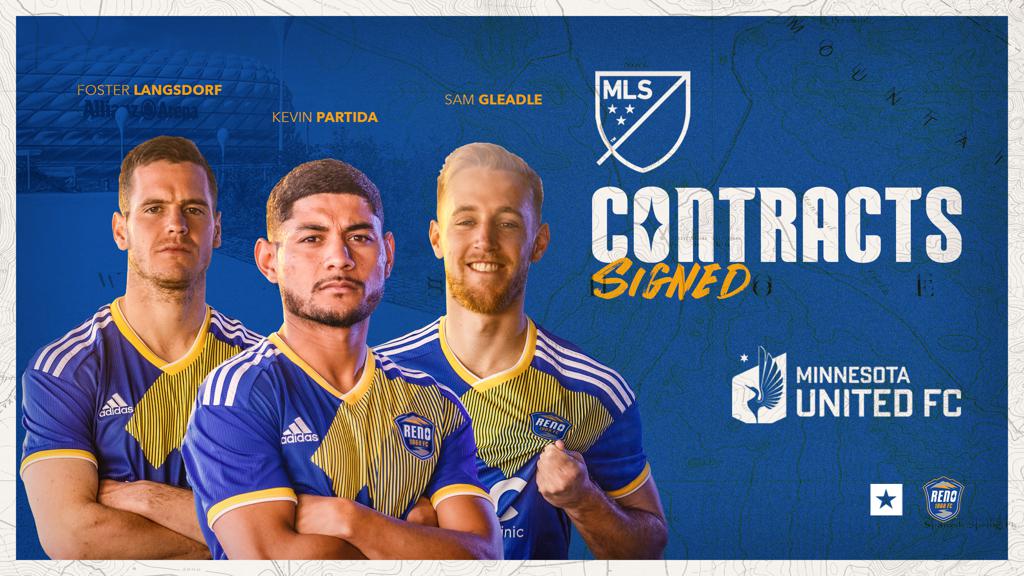 The trio appeared in all 18 games for Reno in 2020, on the pitch for a combined total of more than 4,000 minutes and scoring 17 goals to go with six assists.

Partida, the Sparks High alum, returned to Reno full time in 2020 after spending parts of 2019 in Reno on loan from the San Jose Earthquakes. The midfielder set a career best with four goals, as well as a dominant defensive season en route to his first-ever All-League Second Team selection.

Partida has already seen MLS action as a member of the Quakes, making his MLS ddebbut on June 9, 2018 against LAFC. In his MLS career, Partida has appeared in five games (five starts) racking up almost 300 minutes of play.

Gleadle has been in Reno since signing after a trial in the 2018 preseason, making his pro debut in 2019 as a midfielder. Gleadle appeared in 27 games, starting 16 and scoring five goals to go with four assists.

In 2020, Gleadle made the transition to outside back and saw immediate success. Gleadle led Reno in minutes played with 1,581, scoring twice and earning three assists.

Langsdorf moves on to MLS after just 18 games in Northern Nevada. After two seasons in Portland with T2, Langsdorf came to Reno and immediately made an impact. The Stanford product scored 11 goals to lead the team and finished fourth in the USL in the category. The 11 goals are the fifth-most in a single season in club history, despite only playing 18 games due to the COVID-19 suspension of play. The mark is also good for the ninth-most in a career in club history.

In his two years with Portland, Langsdorf appeared in two MLS games and 25 minutes of action.

Minnesota currently sits fourth in the western conference with 30 points in 19 games, having just clinched a playoff spot and is currently in position to host a home playoff game.