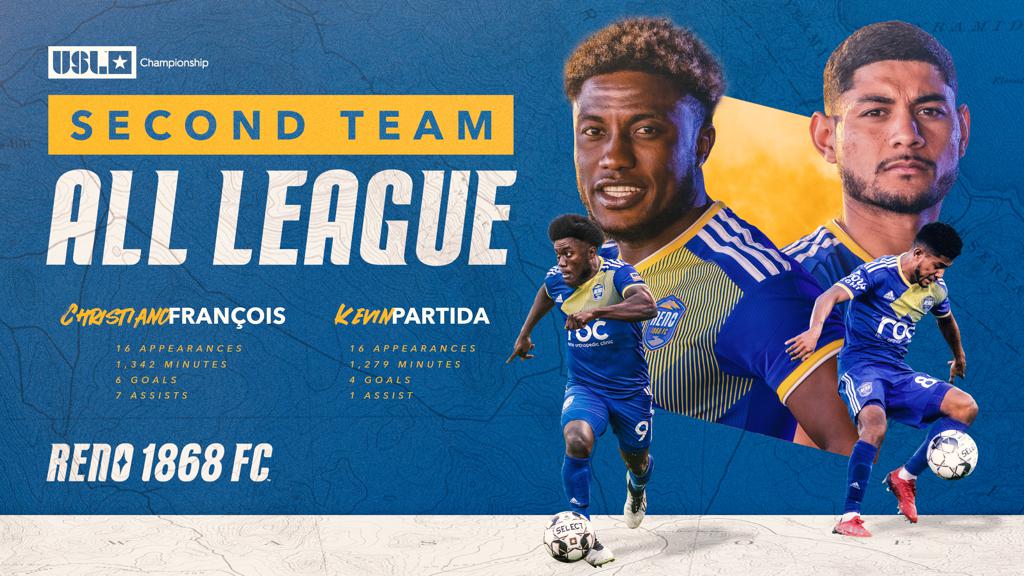 RENO, Nev. – The USL Championship’s All-League teams were announced today, and a pair of Reno 1868 FC midfielders made it onto the second team. Kevin Partida and Christiano François earned the honor, a first for both players. The duo become the fifth and sixth players in Reno’s history to be named to an All-League team, including Corey Hertzog after last season.

Both players posted career years in 2020, with the duo starting every game of the year.

Partida dominated defensively in the central midfield role, leading the team in duels won with 96, finishing second in tackles with 37 and fourth in interceptions with 21.

Adding to his always dominant defensive effort, the Sparks native scored four times. The goal total was a career high, having scored just once in his previous two seasons with Reno. The game always ran through Partida, as he finished second on the team in total passes and sixth on the team in key passes. At just 25 years old, Partida wore the captain’s armband three times as well.

Where Partida was crucial to the team’s defense, François was the key to the attack. The winger finished third on the team in goals with six, and led in assists with eight. The Haitian was one of just two players in the league to finish the regular season with six or more assists and six or more goals. The eight assists were a career best, and the third-most in a single season in club history, despite the condensed season. Just 18 games into his Reno career, François is already tied for the eighth-most in club history.