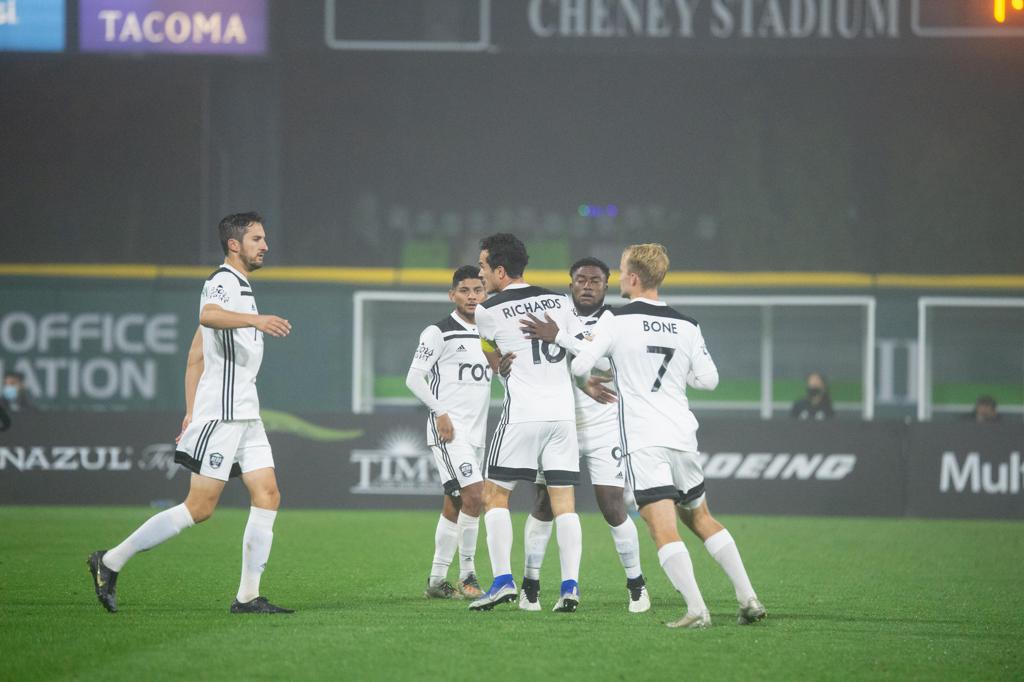 TACOMA, Wash. – On a foggy and chilly night in the Pacific northwest, Reno 1868 FC topped Tacoma Defiance 2-1 to earn a league-best 36 points on the regular season. The point total can be matched only by San Antonio FC, who plays tomorrow. Reno leads San Antonio in the tiebreaker, goal differential +22 to +17.

“Huge win for us,” said head coach Ian Russell. “We came here with a plan and they executed. It was a huge performance. I could tell two or three minutes into the game that they were up for it.”

For the second game in a row, Reno fell behind early. Tacoma scored in the 16th minute to make it 1-0. Unlike the last game, Reno’s answer took a couple minutes. In the 35th minute, Brent Richards would provide the answer.

A corner kick by Sergio Rivas pinged off of a scrum of attackers and defenders, before rolling into a patch of unoccupied grass. Richards came flying in from the right side to clean it up with a point-blank blast into the net.

The goal was Richards’ fourth of the season, his highest single-season goal output with Reno.

Reno would enter the half tied 1-1, but would come out flying in the second. On the night, Reno outpossessed Tacoma 58/42, with twice as many shots on target as Tacoma (six to three).

In the 58th minute, Christiano François would draw a foul in the box to get a penalty opportunity for Foster Langsdorf. Langsdorf would miss the penalty, but the pair would be back in the attack soon enough.

In the 62nd minute, an attacking François would slip a cross through a crowd of four Tacoma defenders to find Langsdorf running far post. The forward tapped in the goal to make it 2-1 and seal the win.

The goal was Langsdorf’s ninth in the last 10 games, and adds to his team-leading 10 goals on the year.

Reno would control the ball for the remainder of the half, and with the exception of a late free kick from just outside the box, coast to a 2-1 win.

The win was Reno’s 11th of the season, and gives the team a league-best 36 points. Only San Antonio can match the goal total with a win tomorrow, but would need to pick up a substantial amount of ground on Reno in the second tiebreaker (the first being total wins). Reno leads in goal differential (the second tiebreaker) with a +22 to +17.

San Antonio plays Austin Bold FC tomorrow at 2:00 p.m. PT. Anything other than a six-goal win by San Antonio secures the top overall seed in the USL Championship Playoffs for Reno.

Reno has never finished the regular season with the most points in the league.

Regardless of the San Antonio result tomorrow, Reno will host the first round of playoffs on Saturday at 6:00 p.m. PT from Greater Nevada Field. The game will be broadcast locally on NSN and ESPN Radio 94.5, and nationally on ESPN+.