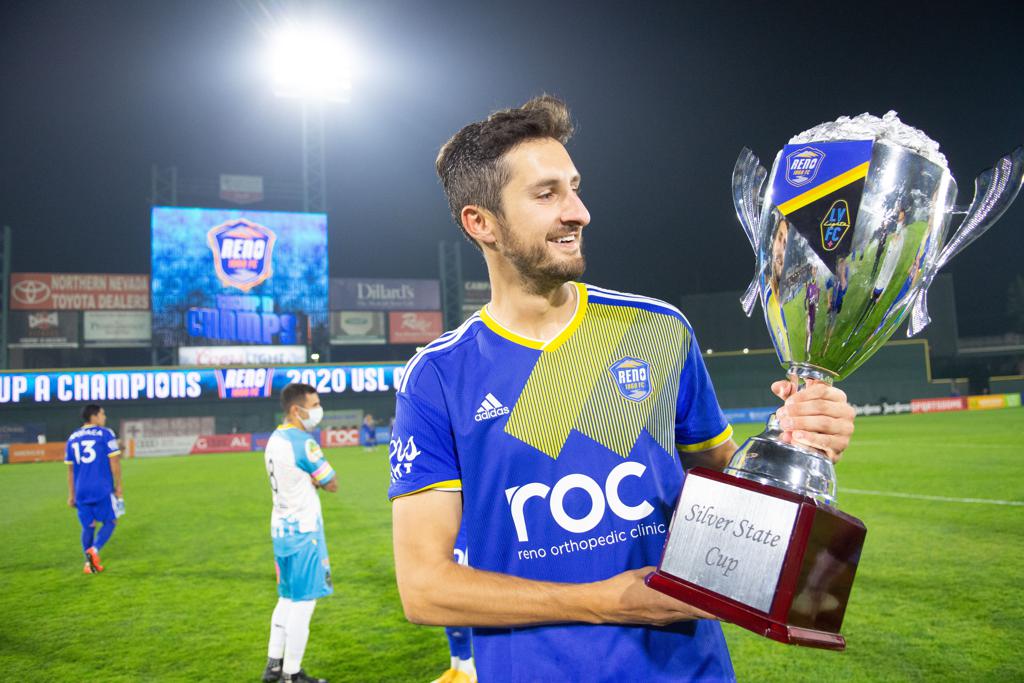 RENO, Nev. – It did not come the way the boys in blue had in mind, but Reno 1868 FC secured the top spot in Group A, a third-straight Silver State Cup and remains in the running for the top overall seed in the USL Championship Playoffs tonight with a 2-2 draw against Las Vegas Lights FC. Forward Foster Langsdorf kept his hot streak going, scoring for the eighth time in the last nine games.

“We got a tie, we should’ve won the game,” said head coach Ian Russell. “Pretty frustrating, but the guys fought till the end. But it clinches us the top spot so happy about that.”

The scoring came fast and early in the game, with Las Vegas’ Junior Burgos getting things started. The midfielder delivered a strike off of a free kick, and put the Lights ahead 1-0. The goal was the team’s first against Reno since September 22, 2018.

Reno would answer almost immediately, with Langsdorf tapping in a beautiful ball from Sergio Rivas to make it 1-1 in the 12th minute. The assist was Rivas’ third in the last three games, and the goal was Langsdorf’s eighth in the last nine games. Langsdorf’s nine goals on the season are the most on the team and tied for fifth in the entire USL.

Then in the 25th minute, Las Vegas would take the lead again 2-1. But Reno would have another answer within three minutes. This time, it was Kevin Partida converting his second penalty of the season to even the score at 2-2.

The scoring would end there, despite Reno dominating in possession 64/36 for the game and 66/34 in the second half.

With the draw, and a Sacramento loss, Reno claims the top spot in Group A and will host the first round of playoffs next weekend against LA Galaxy II. The home playoff game will be the third in club history, and could be the first of many this postseason.

With the point tonight, Reno remains in a strong position to finish with the top overall seed in the USL Championship playoffs.

A win Saturday to close out the season could give Reno 36 points on the season, a mark only San Antonio FC and Tampa Bay Rowdies can possibly reach. Assuming all three clubs win out, the first tiebreaker (total wins) would be even. The second tiebreaker is goal differential, where Reno’s +21 is tops of the trio. If all three teams won, and Tampa Bay and San Antonio made up the goal differential, Reno currently has the third tiebreaker as well – total goals.

In short, a win Saturday all but guarantees a top regular-season finish and home-field advantage throughout the regular season.

Reno has a quick turnaround, as the boys in blue will hit the road to end the regular season against Tacoma Defiance on Saturday. Kickoff from Washington is set for 5:45 p.m. PT, and will be broadcast locally on NSN and ESPN Radio 94.5, and nationally on ESPN+.