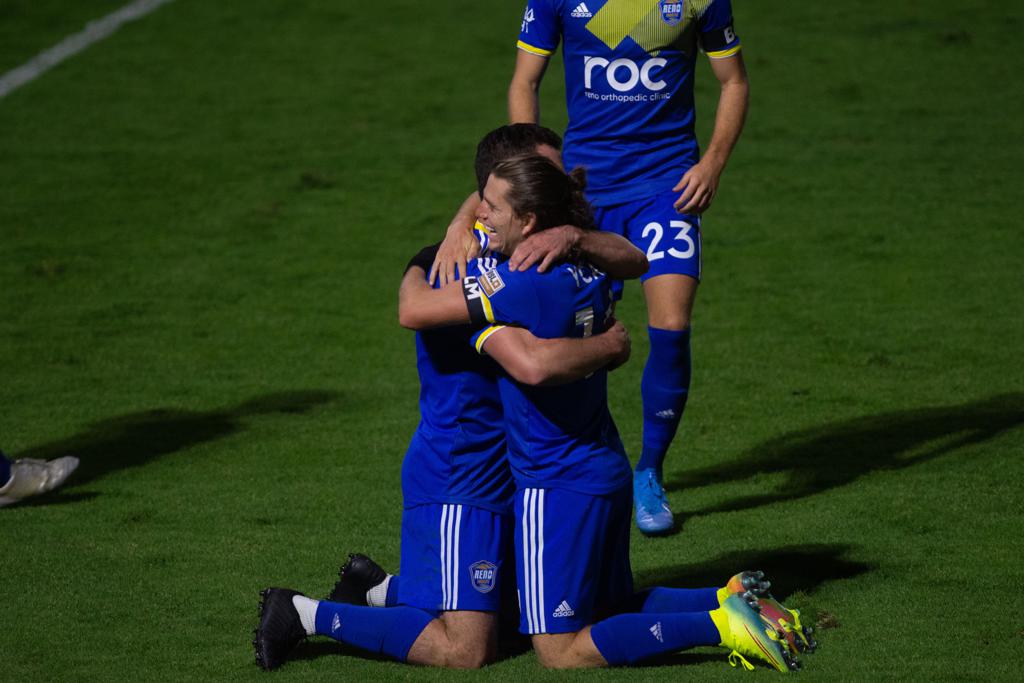 RENO, Nev. – Reno 1868 FC clinched the club’s fourth straight appearance in the USL Championship playoffs tonight, led by rookie midfielder Emilio Ycaza’s goal and assist in the 3-2 win over Tacoma. Reno moves into sole possession of the lead in Group A with a 9-2-1 record and 28 points.

“To be honest I didn’t think we played very well,” said head coach Ian Russell. “Give credit to Tacoma, I thought they were scrappy and played hard. The good thing is that we won the game, and to play poorly and win is a sign of a good team. You’re always going to have games in a season where you don’t play well, so to win one of these is important.”

For the third straight game, Reno came out to an early lead with a goal in the first five minutes of play. Midfielder Christiano François came charging in from the wing, and his cross into the box ricocheted directly to a trailing Sam Gleadle. Gleadle was able to get enough on it to score his first goal of the season, and sixth of his career.

Reno would take the 1-0 lead into halftime, the seventh time this season that the boys in blue led after 45 minutes of play. The win moves them to 7-0-0 in such contests.

Early in the second half, Ycaza would step up to make it 2-0. After a deflected ball bounced to him outside the box, the native of St. Petersburg, Florida was able to corral the ball and put a highlight reel goal into the back of the net. The strike dipped over the keeper to mark his first professional goal.

The goal comes in just Ycaza’s second start of the season, and first since July 19 against Sacramento.

“He played really well. I always like when someone gets an opportunity,” said Russell. “Sergio [Rivas] has been very good for us all season but he’s got a bit of an injury. We put Emilio in and he played well. Not only scoring and getting the assist but his overall play was really good.”

Tacoma would answer with a goal in the 55th minute to make it 2-1, but Ycaza would again be in the center of the action on a Reno response.

In the 57th minute, Ycaza would find a running Langsdorf who was able to turn and fire a shot into the back of the net.

The goal was Langsdorf’s seventh of the season, and marked his sixth-straight game with a goal, which ties a club record. The seven goals lead the team.

Tacoma would manage a goal in the 75th minute to make it a one-score game, but the damage was done.

Reno’s three goals marked the fifth time in the last six games that the team scored three or more, and marked the 11th, 12th and 13th goals in the last three games.

Reno has another quick turnaround, traveling to Portland on Sunday to take on T2. Kickoff is set for 6:00 p.m. PT, and will be broadcast locally on NSN and ESPN Radio 94.5, and nationally on ESPN+.