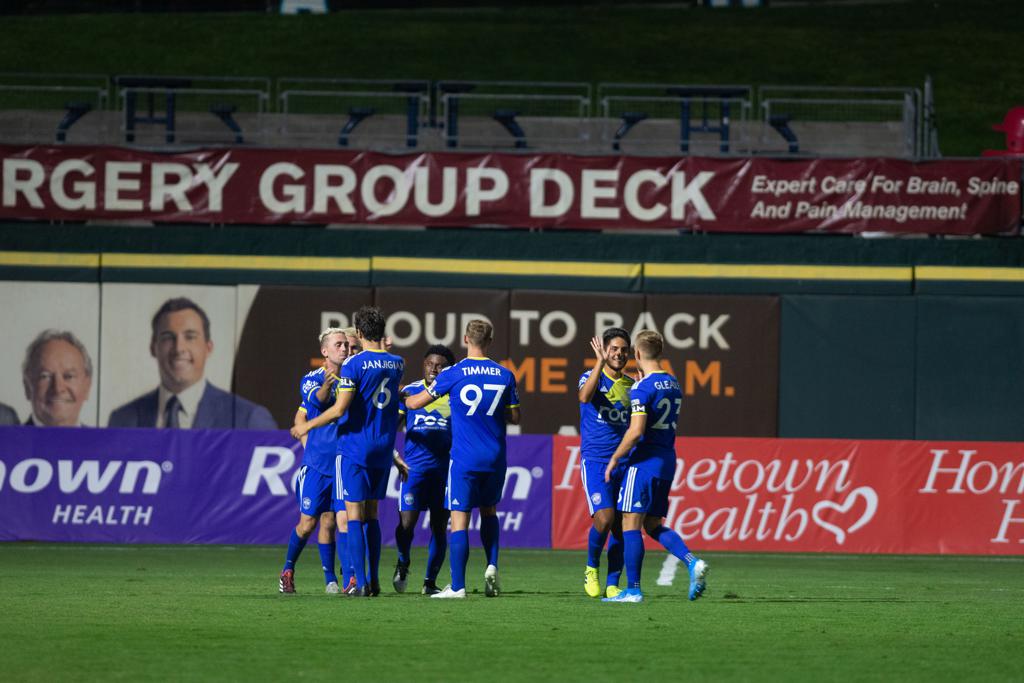 RENO, Nev. – Reno’s offense unloaded in a 7-1 victory over Portland Timbers 2 tonight, behind a brace from Tucker Bone and a pair of assists from Sam Gleadle. The seven goals are the second most in club history.

“it was a good result for us,” said head coach Ian Russell. “I think it shows the mentality of our team playing against teams that are struggling to get on them early, get some goals early, and keep our foot on the gas pedal.”

The attack started early, with Bone recording the second-fastest brace in club history. In just the second minute of action, the midfielder received a header from Foster Langsdorf and was able to corral the ball away from a Portland defender. After making a defender miss, Bone put a strike on goal and gave Reno a 1-0 lead.

Less than 10 minutes later, Bone would strike again. Flying in from a wide position, Bone broke down a defender and put another rocket on goal. After taking a ricochet off a Portland defender, the ball found the back of the net. The early brace was the second only to Dane Kelly, who scored within the first six minutes against Phoenix in 2017.

The goal was his fourth of the season, tying him for the team lead with Langsdorf and Hertzog, but not for long.

In the 19th minute, a T2 penalty would give Hertzog a scoring opportunity. The veteran striker didn’t miss, marking his fifth goal of the season and making it a quick 3-0 lead for Reno.

The goal was Hertzog’s 24th in Reno and 67th in the USL. The 24 goals with Reno are just behind Brian Brown’s club-record 28, and the 67 in the USL are good for the third-most all time.

The onslaught was still just beginning, as Langsdorf would join the scoring party with a goal in the 35 minute off of a beautiful ball over the top of the defense from Jared Timmer. The assist was Timmer’s first as a professional, and the goal tied Langsdorf with Hertzog for the team lead at five apiece.

Reno would take the 4-0 advantage into halftime, the most goals in the first half of a game this season and second-most in club history.

After halftime, Reno would pick up right where it left off. Hertzog would sneak a free kick through Sergio Rivas’ legs to Christiano François, who put up a quick shot on a scrambling Portland defense. The goal would make it 5-0, and give Hertzog his third assist in as many games.

Hertzog is now seventh in club history for assists with nine.

In the 65th minute, Reno’s captain Brent Richards would notch his second goal of the season to make it 6-0. Midfielder Kevin Partida found Richards with time and space outside the box, and the collegiate striker-turned-defender would put a laser into the far corner.

The goal was Richards’ fifth with Reno. In all five games where Richards scores, Reno has won.

T2 would score their lone goal in the 74th minute, throwing a wrench into an otherwise sharp night from Reno keeper Ben Beaury.

Not to end on an opposing goal, Reno rookie Benji Kikanovic would score off a ball from Gleadle to make it 7-1 in the 77th minute. The goal was Kikanovic’s second of the season, and Gleadle’s second assist of the night. Gleadle earned multiple assists for the first time in his career, and becomes just the eighth player in club history to earn multiple assists in a single game.

The seven goals are the second-most in Reno history, just short of the club-record nine goals against LA in 2017.

Reno moves out of a tie with Sacramento for first place in Group A with 24 points. The boys in blue are back in action next Saturday in Sacramento as they look to avenge two losses to Sacramento this season. Kickoff from Papa Murphy’s Park is set for 7:30 p.m. PT.