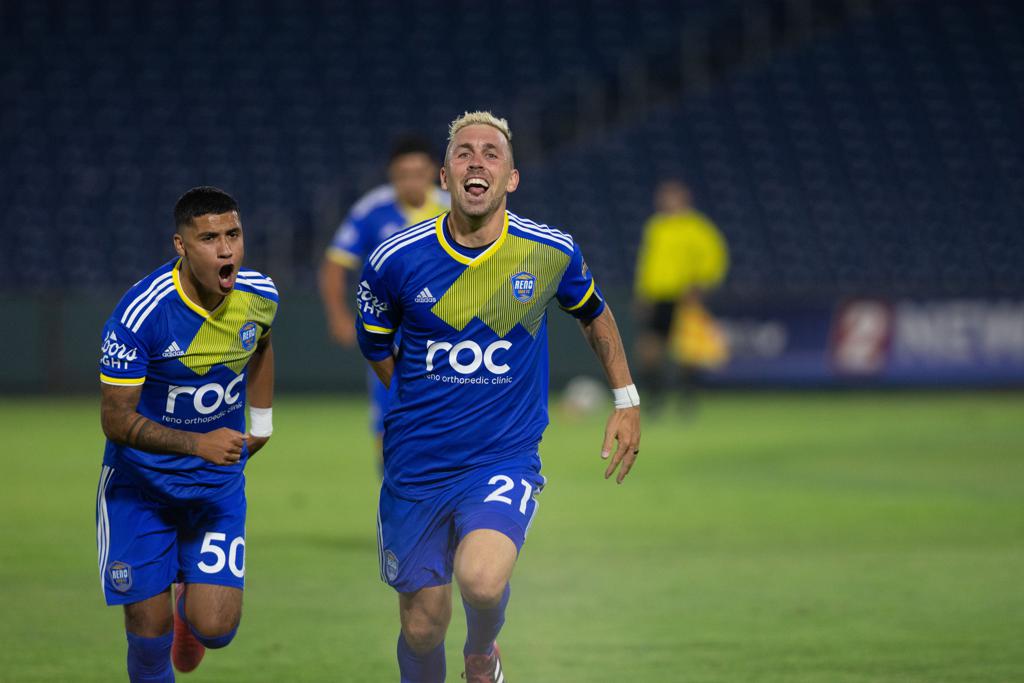 RENO, Nev. – Reno topped Phoenix Rising FC 2-1 tonight in a battle of two of the USL’s top clubs that felt like a playoff game from the start. Reno’s defense held the highest scoring team in the league, and three of the top five individual scorers, to just one goal. Corey Hertzog scored the game winner and assisted on Foster Langsdorf’s third goal in as many games

Despite Reno controlling possession, the first half would be fairly even with the two sides combining for just three shots on goal. The scoreless first 45 minutes were the fourth time this season Reno was unable to score in the first half. Before tonight, Reno had only entered halftime tied once; a 1-0 loss to Sacramento Republic FC in July.

In the second half, the two sides would again battle for possession with neither side dominating. In the 62nd minute, Hertzog would find a sliding Langdorf just in front of Phoenix’s keeper to chip the shot in and take a 1-0 lead.

Phoenix would be unable to answer until the 77th minute, when Rufat Dadashov would score to tie the game.

The tie would not last long, as just two minutes later Hertzog would intercept a poor pass between Rising defenders and take a breakaway towards the goal. After faking a near-side shot, the veteran forward would go far post and ricochet the ball off a charging Phoenix defender.

The goal would be enough to give Reno the lead, as Reno’s defense fended off a late charge from Phoenix. Rising FC ended with 25 shots on the night, with 18 coming in the second half. Reno was outshot for just the third time this season, and moves to 2-1 when it happens.

Reno’s defense was outstanding on the night, with the top performer being Sam Gleadle. The outside back effectively took defending league MVP Solomon Asante out of the game. Asante registered just four shots in the game, after leading the league in goals in 2019.

Through nine games, Reno has allowed just nine goals and only allowed multiple goals in a game once. On the season, Reno is undefeated when scoring a goal. The club’s only losses have been in shutouts.

“Defense has been good all season long. [Only allowing multiple goals once] is the sign of a good team and we’ve done that,” said Russell.

Reno moves out of a tie with Sacramento for first place in Group A with 21 points. The boys in blue are back in action next Saturday at Greater Nevada Field as they host Portland Timbers 2. Kickoff is set for 7:00 p.m. PT.