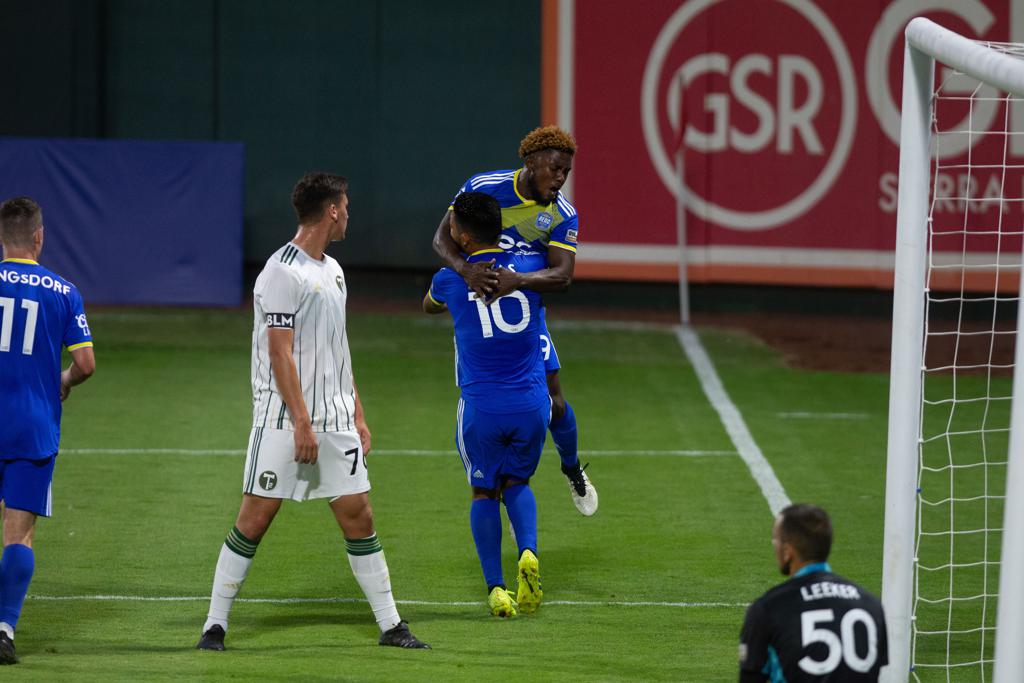 RENO, Nev. – Reno 1868 FC’s attack came alive tonight with a season-best five goals in a 5-2 win over Portland Timbers 2 tonight. Leading the attack was Corey Hertzog with a brace, as well as two assists apiece from Christiano François and Brent Richards.

In the 25th minute, Sam Gleadle found a sliding Hertzog with a well-placed cross to put Reno up 1-0. The goal was Hertzog’s second of the season after leading Reno with 19 last season.

Just three minutes later, an attacking François would chip a ball back into play just short of the endline and find the head of Sergio Rivas. Rivas would get the ball past the keeper and notch the second goal of the game.

The goal was Rivas’ second of the season, with his first coming in Reno’s first matchup against Portland. Through six appearances, Rivas has matched his goal total from all of last season when he appeared in 16 games.

In the 38th minute, Tucker Bone took a ball from Richards and put a rocket on target. The ball took a deflection off a defender and wound up behind the keeper for Bone’s first goal with Reno, and second as a pro.

“Tucker’s been excellent, he started off really slowly in preseason. He just wasn’t up to the level I thought he could be,” said Russell. “About three weeks ago there was a noticeable change, and he’s been really really good. I’m glad he scored tonight, it does a lot for his confidence.”

The first-half onslaught wasn’t over. In stoppage time just before half, François found Hertzog again on a set piece. The brace is Hertzog’s first of the season, and fourth with Reno. No other player in club history has more multi-goal games, as Hertzog is tied with Dane Kelly for the most in club history.

The two goals also moved the striker up the all-time goals leaderboard with 22, trailing Brian Brown by just five for the most in club history.

In the second half, Reno would again control the game. Richards earned his second assist of the night on a ball to former Portland draft pick Foster Langsdorf, his second goal of the season against T2.

Reno would suffer two late goals by T2 in the 72nd and 76th minutes to disrupt a possible clean sheet by keeper Ben Beaury.

The offense unloaded tonight like it has only a handful of times in club history. The goal and assist totals are both in the top five in club history, along with shots (23) and shots on target (11). Reno has now scored nine goals against T2 this year in just two games.

The team will look to keep the offense pumping next week against San Diego Loyal SC, with the boys in blue playing in California on Saturday. Reno still holds first place in Group A, taking the goal differential tiebreaker on Sacramento with a game in hand. Kickoff from San Diego is set for 7 p.m. PT, with the game set to be streamed on ESPN+, Nevada Sports Net and ESPN Radio 94.5.