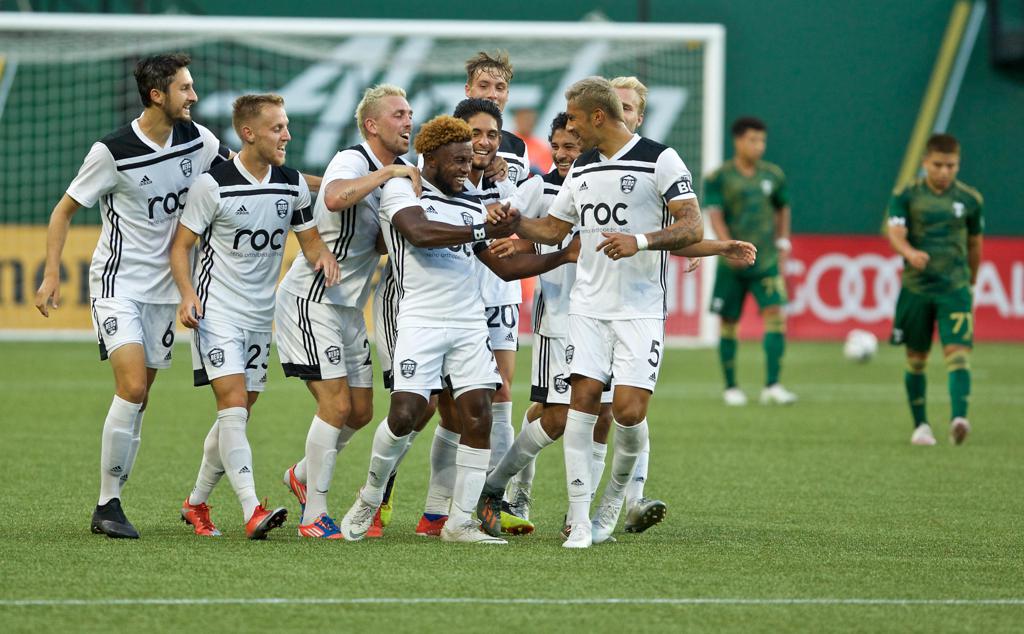 PORTLAND, Ore. – Reno 1868 FC dominated from start to finish tonight in a 4-1 win over Portland Timbers 2, moving the club back into first in Group A with six points. Leading the way for Reno was Christiano François with two goals.

“We came into it as the game went along, started creating chances and found some good stuff down the flanks on Christiano [François] and Sam [Gleadle]’s side,” said head coach Ian Russell. “I think we got after them on the flanks, and then the middle started to open up after we did that. We had a lot of good performances.”

Despite only outshooting Portland by two, Reno controlled possession and the tempo of the game throughout. After consistent attacks from François and Sam Gleadle on the left side of the field, François finally broke through with a rocket from just outside the box in the 40th minute.

The goal came off a pass from Thomas Janjigian, giving the defender his first career assist.

Reno took the 1-0 lead into the half, and really got on a roll in the second half. In the 52nd minute, an attempt to clear the ball by Portland found Sergio Rivas outside the box. The midfielder ripped off a shot and found the back of the net.

The goal was Rivas’ first of the season and third of his career. Including his one career assist, Reno is now 4-0-0 in games where Rivas scores.

Portland would answer in the 73rd minute to make it a one goal game, but Reno would tack on two more before the final whistle.

In the 82nd minute, former Portland player Foster Langsdorf scored his first goal with Reno to make it a more comfortable 3-1 lead.

Langsdorf wasn’t done, as he’d go on to draw a penalty in the 90th minute. François converted, putting the exclamation point on Reno’s first win in four months.

François’ brace puts him in the team lead in goals with three, and makes him the third active player to score twice in a single game, joining Gleadle and Corey Hertzog.

“He’s a gamer … every time he steps on the pitch he’s electric and very dangerous,” said Russell. “He works hard offensively, but defensively as well.”

“Eric showed a lot of command, and distributed the ball well,” added Russell. “Benji looked good against Sacramento and earned the start. He’s a dynamic player. Jared coming in at halftime I thought was excellent.”

Reno has one last road game to play before returning to Greater Nevada Field, taking on Las Vegas Lights FC on Saturday. The first Silver State Cup game of the year comes after Reno swept Vegas last year, and has never lost to Lights FC. Kickoff is set for 7:15 p.m. PT, and will be broadcast locally on NSN and ESPN Radio 94.5, and nationally on ESPN+.