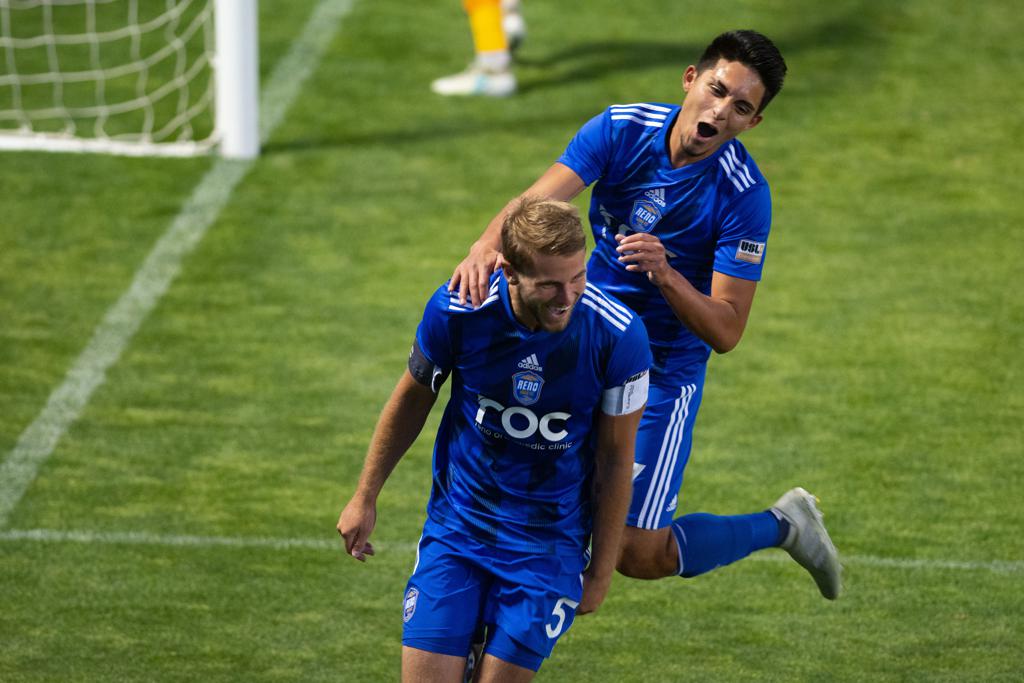 “It was a good performance, a lot of goals and a shutout,” said head coach Ian Russell. “I knew coming in that we had a really deep team, and they’re stepping up.”

Reno would kick things off with Gleadle earning his third goal of the season in the 23rd minute. Duke Lacroix set it up for his third assist on the season, and marked his second consecutive game with an assist.

“He came in in preseason and I said ‘Sam you have all the physical tools, but you just have to get consistent,’” said Russell. “He’s done really well this year.”

Gleadle’s second goal of the half came in the 45th minute, with Gilbert Fuentes setting him up. With the goal, Gleadle becomes just the second person to score twice in a half for Reno this season, joining Corey Hertzog. Gleadle also becomes the third to score twice in an entire game, joining Hertzog and Brian Brown, who accomplished the feat twice.

The momentum from Gleadle’s second goal would carry on early in the second, as the team scored two goals in the first six minute after the break. Gleadle would assist on the first goal, putting the ball right in front of the goal for an easy tap in by Corey Hertzog. The goal ties Hertzog with Brown for the team lead in goals with eight.

“it feels really good, all the guys have been working really hard,” said Gleadle. “Credit to the guys getting the balls to me, I was lucky enough to finish them.”

The assist makes Gleadle the first to score two goals and record an assist in a single game for Reno this season.

In the 51st minute, Zach Carroll would tally his first goal on the year. Carroll entered the match with just five shots on the season, and had just two goals all of last season. Assisting on the goal was Seth Casiple, bringing his season total to four, second on the team behind Brown’s five.

The boys in blue will have a break until their next USL Championship match on Wednesday, July 17 at OKC Energy FC. Reno will be at home before then however, with an international friendly against Liga MX’s Club America U20’s on Friday, April 12. Kickoff is slated for 7:30 p.m. PT, and tickets are available at reno1868fc.com or the Greater Nevada Field ticket office.